Author Henry L. Mencken came from a prosperous German-American background. His family owned a cigar factory in Baltimore. He may have encountered Michelob in ethnic bars like Cafe Berlin early in his newspaper days: 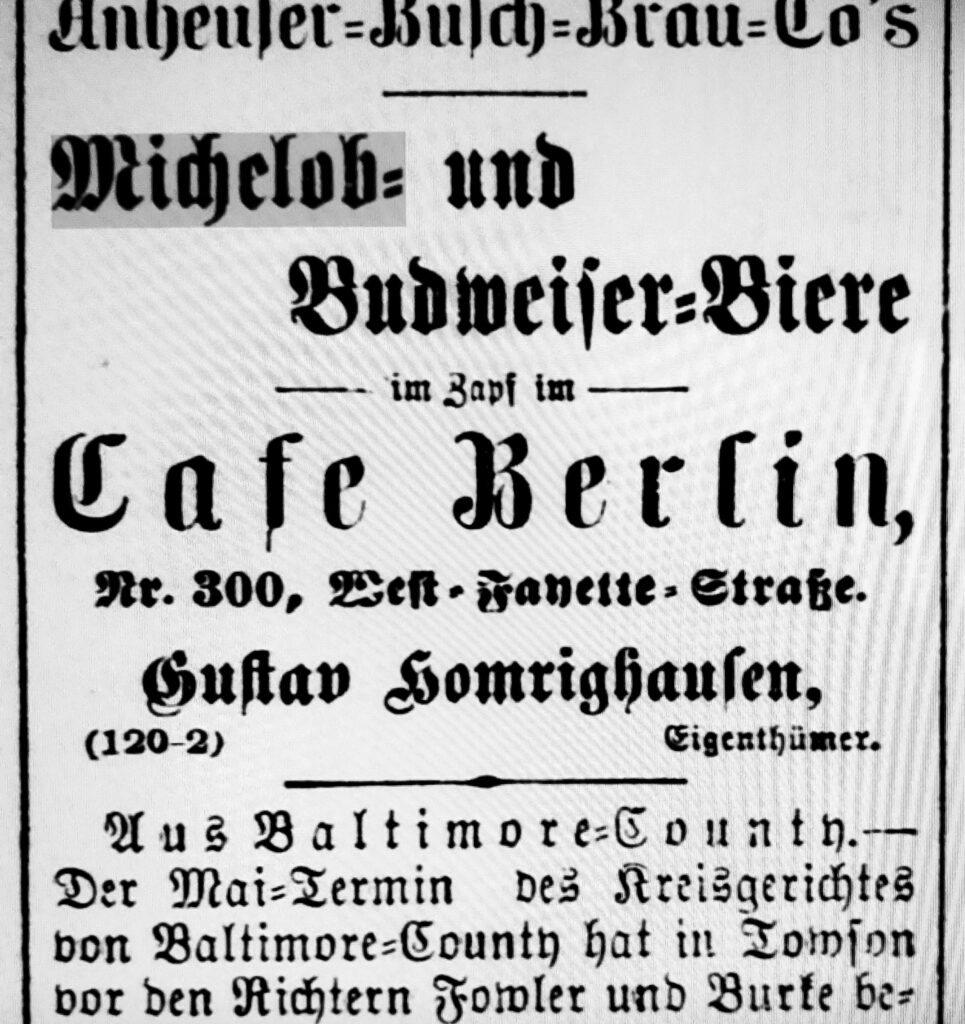 This ad appeared in the Baltimore German press in 1896, one of the first known for Michelob, as it was introduced that year.

Mencken is generally considered a satirist à la Jonathan Swift and Mark Twain. The sobriquet “Sage of Baltimore” was probably a mocking, as much as a complimentary, reference, but it shows his influence in this period.

By mocking, I mean that many in the cultural establishment considered Mencken a stylist, not a deep thinker, at least not a consistent, persuasive one.

The educator and cultural critic Irving Babbitt once typed Mencken, in The Harvard Crimson, as a producer of “intellectual vaudeville”. His opposition to American entry in World War I did nothing to endear him to received opinion, certainly.

In my view, Mencken was more high-level gadfly and iconoclast than penseur, but few have equalled his writing ability. And his comments on beer are of good value as social history.

I referred to Mencken earlier – at his most scintillating – in connection with German bock. I mentioned him as well in Part I of this series where he sentimentalizes, still satirically, Michelob and summer evenings. He had yet more to say on Michelob.

The Literary Digest in New York in 1923 published an anonymous article on Mencken, not attributed. It quoted Mencken in a recent article where in typical fashion he orated on matters alternately serious and frivolous, on a broad range of topics.

Mencken’s enfilade allowed that “Michelob beer” was a notable product of American civilization together with “Mount Vernon” (a rye whiskey) and the Bronx cocktail.

Pistols for two (1917) is a mock biography of Mencken and his collaborator and co-editor, George J. Nathan. Nathan is remembered for his magazine work with Mencken and sparkling New York theatre criticism.

Ostensibly the book was authored by Owen Hatteras, but really was penned by Mencken and Nathan.

He drinks all the known alcoholic beverages, but prefers Pilsner to any other; a few seidels make him very talkative. In the absence of Pilsner, he drinks Michelob.

Next to Pilsener and Burgundy (or, in wartime, Michelob), his favorite drink is city water direct from the tap – no ice.

Even here he digs at American culture, its penchant for ice water at table.

Note: sources of images above are linked in the text. All intellectual property therein belongs solely to the lawful owner, as applicable. Used for educational and research purposes. All feedback welcomed.

*Marion Rodgers, a Mencken biographer, wrote a superb essay on the family cigar business and H.L.’s relationship to it.